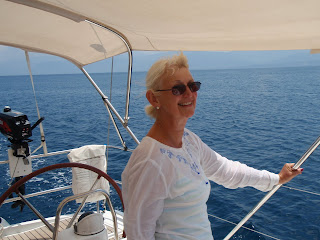 There's something a bit more than alliterative about sailing Turkish waters with a captain named Waters, but that's what we're doing on the 'Hilda May' out of Fathiye. Mountains all around us falling down to many, many little bays and coves where we anchor for the nights. Lazy hot days, sometimes interspersed with panic attacks as I'm supposed to do something nautical with ropes and anchor chains and sails. Everything has its own different name - heads, galley, taffrail, transom - I have to translate in my head before action and delay does not please the captain, who runs a tight ship while I softly sing that line from 'The Leaving of Liverpool' which paraphrased goes '. . . the captain's name was Waters and his ship's a floating hell'. The food in the small quayside restaurants is to die for: fish and prawns straight from the net. Most of them make their own bread in a wood fired oven as one rises in the early morning. Heaven. There is the added bonus of golden eagles flying over the hills and indeed we saw (and I photographed) one eagle owl on a branch. Scrabble of an evening on deck is a bloody affair, with the captain bemoaning the fact that flogging one's crew is no longer permissible. Nautical words count double, so you can imagine who scores most on that count.

On a recent blog I reported that I had found a new literary agent after the Maggie Noach Agency closed. I was premature. I met with the man, who seemed enthusiastic about my work, took my latest novel with him, called me the next day for an electronic version of the manuscript and promised to get back to me sooner or later. That was the last I heard from him. After nearly 3 months, four emails, one non-returned phone call (during which is assistant claimed he had not been told about me or my novel) I suddenly twigged that I was never going to hear from him again. I felt very stupid and somewhat angry. I could go on a little about good manners, honour, respect, and a few other social graces that seem to have fled in this case, and I could give the man's name, but I have absolutely no idea why he has not contacted me again after our first and only meeting. Straight dealing used to be standard, but standards seem to have dropped.
Posted by zanerjabd at 12:19 2 comments:

Fat Larry and Me 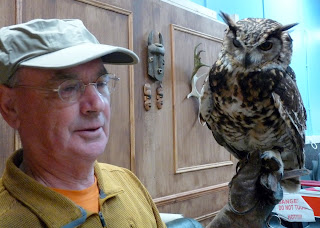 This is me with Fat Larry on my wrist (I didn't name him, his mother did), and as you can see I'm lost in my head somewhere as usual, wondering if there's a story in all this owl touching, while Larry is staring at me, probably thinking, 'What is this old git doing? He's supposed to be making a fuss of me, not day dreaming!' Afterwards Larry nuzzled up to my cheek, to comfort me for having bad thoughts about me.

We, the mistress of the house and I, are getting ready to join Colin on his 13 metre sailing yacht in Turkish waters for ten days. (Fat Larry declined the invitation). This is our third year crewing (I use that word loosely) for Colin, who unlike most of the yacht captains I have known, does not yell and scream when one winds the sheet the wrong way around the winch, or pulls on the halyard at the wrong moment. We have to re-acquaint ourselves with our knots of course (once learned in the scouts and guides and never forgotten) and get used to sliding into a cabin space not much bigger than a coffin, but the whole trip is a great experience. The Turkish people are friendly and welcoming, the coast line is full of antiquities and rugged scenery. The food is wonderful. The fizzy drinks are great. (I'm not a little ol' wine drinker, me)The music from Colin's guitar floats over the bays of an evening and later there's a fierce Scrabble battle on deck (Colin makes the rules - Ahab, Bligh, Colin - these tyrannical captains!) and blood runs in the gunwales. Wonderful.

On the writing front, my new collection of short stories The Fabulous Beast is due out from Infinity Plus - science fiction, horror and fantasy tales of the best quality and width. Later in the year, Poems, Peoms and Other Atrocities, a poetry collaboration with my great pal Rob Holdstock should cause a hurricane of excitement amongst those who enjoy verse and worse. That's All Folks! Hasta luego, baby, as Arnie actually should have said.
Posted by zanerjabd at 08:52 4 comments: 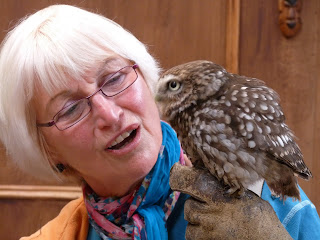 My daughter gave Annette and me a gift voucher for 'Owl Handling', which ever since my dear wife has called 'owl touching' (and even once got the recipient a little wrong and called it 'turkey touching'). So owl touching has become the family phrase for our outing, which took place today on a beautiful sunny hillside in Kent. An email to a friend, Dean Howell, telling him where we were going and what we were doing, sparked the following reply: 'Owl touching OK, but Howell touching strictly forbidden.' You have to laugh, don't you? Anyway, it was great fun, despite my earlier misgivings about birds in captivity. These, we were assured, were all refugees and could not nor would not survive in the wild. Certainly they were as tame as domestic cats and dogs and allowed us to ruffle their feathers - in fact they liked being stroked - stared into our eyes as if to say, 'Whoooo the hell are you, buddy, to touch me? How about I touch, you?' Which they did.

On the writing front, my novel progresses. I punch the keys and the words appear on the page. I am for once really enjoying the writing. Oh, yes, I always enjoy finishing a novel, a bit like I would enjoy seeing the green edge to a desert I've been tramping through for six months. But often being immersed in the writing, though not unpleasant, is difficult. I'm not a great believer in inspiration and certainly don't sit around waiting for the muse to strike. Blood, sweat and tears, yes, but flashes of brilliance, not my forte. If brilliance comes it does so incidentally or accidentally, during a sweaty bout of 2000 words and has me saying afterwards, 'Hey, did I write that? Bloody hell!' Indeed, it is often a pleasant surprise, like a gift from the tooth fairy.
So, Ring-a-ring o' Roses is getting there, quite pleasantly, as if it wafted into my mind on zephyr. Yay!