The Earth turns, every day, and brings fresh happenings to my life, some of them good, some of the bad. The other day I woke to find myself a great-grandfather with a great-grandson: Arden Douglas Lillie. (Douglas is my own middle name: a great honour). This was a good event: new life into the world. However, one of my best friends died recently, a wonderful man we call 'Trinny' who was born on St Vincent in the Caribbean. One in, another out.


I met Trinny Sutherland when we were both serving in the R.A.F. and were stationed with our families in Cyprus in the early 1970s. Trinny married a British lass, Lorraine, who he met in High Wycombe not long after arriving in England from the West Indies. We never lost touch with one another, our kids got on well together - and oh heck, I miss him a lot and so do many others. He was one of the stalwart people in my life, who I admired and loved as the best of men. His good humour was infectious, his principles were of the highest value and his sense of honour unimpeachable. His family, his Church and his friends were the most important things in his life, probably in that order.

On the travel front, Annette and I were meant to go to Kenya/Tanzania in June, when health issues intervened and we had to postpone the trip. We did, however, still go on our annual sailing holiday with boaties Colin and Sue, whose trim little craft the Hilda May never fails to provide enjoyment on Turkish waters. The African trip is now planned for December. In the meantime we also did a tour of Holland on bicycles, along with Tamzin and Dean, two  friends with legs of iron. Amsterdam, Haarlem, Leiden, Delft and Gouda were sought and passed through over seven days. I never cease to be amazed at the number of cycles and cyclists in Holland: one parking lot had 9,000 bicycles stacked in three tiers. Lovely flat countryside with cycle paths going everywhere along canals and networking the towns. Holland is definitely a two-wheeler country. It's an eerie feeling being watched closely by dozens of sharp-eyed herons, who I imagine are suspicious of humans with circular legs whizzing by their watery landscape.

On the writing front, my third collection of poems, Alchemy in Reverse was published by Stanza Press, an imprint of PS Publishing, and one or two readers seemed to like it. Poetry is probably the least favourite literature of the human race, so I take what compliments are going and say thank you very much. I also recently completed a collection of short stories, each tale based on a metal element - Gold, Silver, Iron, Nickel, etc. The title, supplied by my clever wife, is to be Elemetal Tales. PS Publishing has bought the collection and will probably publish it sometime next year or the year after. I am still waiting for some astute publisher to pick up my novel set in Anglo-Saxon England: Lord of the Wild Hunt. When, if ever it gets published, Wild Hunt will be my 74th novel. Quantity, hopefully with a goodly splash of quality.
Posted by zanerjabd at 16:33 1 comment:

Someone called Martin, a ukulele band leader very kindly told Annette the other day that he enjoys my blog. He said he especially likes the pieces on travel. So, here we go with a few journeys to India, probably my currently favourite country, especially since I've always loved Kipling. One of my top ten works of prose is 'Plain Tales from the Hills' and 'Barrackroom Ballads' high on my list of poetry.

Annette and I first started to go to India in the noughties, having almost exhausted Malaysia, Hong Kong and Singapore with many, many visits. (My daughter Shaney and her family lived in Singapore for several years and Annette's old boss from our Hong Kong days, Robin Moseley, also put us up several times). It was in 2003 that we did the Golden Triangle: Delhi, Agra and Jaipur, three fabulous cities with wonderful buildings and natural areas as many tourists have discovered. We drew the triangle in trains and with a Fiat Panda, plus a driver named Vivan who knew how to avoid potholes, and camels and elephants coming the wrong way down a motorway. We stayed in 'heritage' accommodation, which meant old Raj hunting lodges and Maharajah's palaces which recently had been forced to turn into hotels. At the time SARs was widespread and the month of the year ensured that temperatures in Rajasthan were around 50 centigrade: thus we enjoyed the palaces and hunting lodges completely alone, with the staff eagerly expecting us to attend every single meal, including tiffin and supper.

Our sightseeing of Delhi and Agra went much as any tourist expects, visiting all the usual forts, temples, palaces, towers and strange trees. It was on our way to Jaipur that things began to take an unusual slant. Firstly, the aircon in our little Panda exploded as we crossed a small desert and with the windscreen down we drove head first into a bank of hairdriers on full volume. Arriving at our hotel, still in the desert, we discovered it had been closed for six months. Vivan took us on to Jaipur, to the Indian Tourist Office who had helped arrange our trip, and told us, 'Be very angry with them, sir, for they deserve it.' We weren't angry because they put us in the poshest hotel in Jaipur and arranged for us to visit the best game park in that area of India, Ranthambhore. On the way to the game park we entered a village unaware that a riot was taking place and had our windscreen broken with a rock before Vivan managed to drive out into the surrounding ploughed fields, followed by a line of cars and lorries who were also escaping the mayhem.

The following day we were due to go on safari into Ranthambhore to look mainly for tigers. Bill Clinton had been there the week before and had seen none in seven days, so we didn't hold out much hope. However, when we climbed into the jeep there was another man sitting in the front along with guide. He introduced himself as M D Parashar, the wild life artist who painted the tiger face for Esso petrol. His paintings of tigers were, we were told by the guide, famous throughout the world. 'Mr Parashar is allowed to go into areas of the park where normally tourists are not permitted,' said the guide, 'so we are lucky to have him with us.' Indeed we were. We saw two beautiful tigers that day: one lying in the shade of a bush, which we could not photograph with any clarity at all, since his camouflage was almost perfect, and the other a female who almost posed for us. Unfortunately my camera had a fault that day so the poor picture immediately below is mine and the other belongs to an unknown photographer, but is of the same tigress. 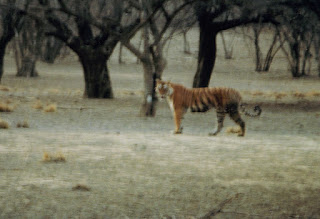 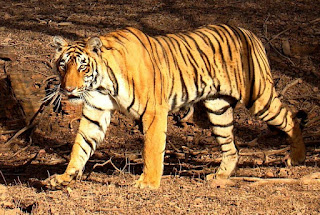 Needless to say we were delighted and even got invited back to Mr Parashar's studios for high tea! The rest of that trip passed pleasantly enough, once back in the pink city of Jaipur.

Following this holiday, Annette began going to a remote school in the semi-wild state of Bihar for one month a year to improve the English of the pupils. It was a charitable gesture for a friend whose eye doctor had founded the school for mostly 'untouchable' children, having been one of their number as a child. The bed was very basic, the food mostly lentils with a few other vegetables and at night the watchmen kept waking her up with whistles, which they used to contact each other and inform the sleepers that all was safe and well. Bihar State, close to Bangladesh, is one of the poorest in India, has bandits on the roads and is prone to floods and other disasters. One of the stories which I found touching was of a pupil at the school who was the only child of a poor widow, who would, after school was out for the day, gather other less fortunate small children under a pepel tree and for one ana each teach them those lessons he had learned that day in class, so that he and his mother could eat. Annette enjoyed her visits and afterwards flew down to Kerala where I was waiting for her, so that we could holiday in that Christian state with its Communist local government. Indeed, the red flag flew from church spires and there were companies with names like 'The Infant Jesus Radiator Works'.

We had one more visit to Kerala when Annette stopped going to the school and on that same holiday visited Tamal Nadu's Pondicherry, with Indian policemen still in French uniforms, and Karnaktaka, where we tried to see tigers again, and failed. However, we did see some fabulous birds, including the two kingfishers pictured below. 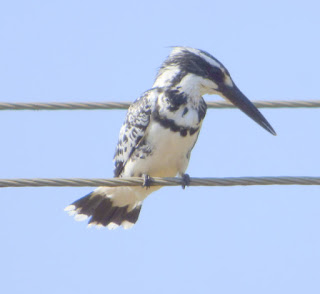 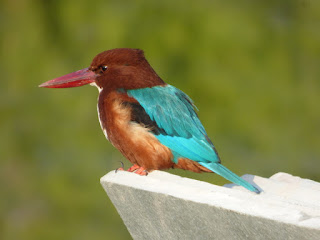 Our last visit was undoubtedly the best Indian holiday ever, when we visited first Goa, then five game parks in Gujarat, where we saw Asian lions, blackbuck deer and a whole mass of India birds, including several types of eagle, harriers and hawks. Again, we had our own car and driver. Pundit was brilliant, stopping every time he saw a bird on tree or wire, saying, 'Quick, sir, capture that one. What is it? I must learn what they all are. I am becoming a birdman, sir, just like you.' I am not a really knowledgable 'birdman', I simply enjoy photographing wildlife, but when I got home I sent him the same volume I owned myself: 'Birds of India' which I hope he now enjoys and uses to entertain his charges as he drives them along the roads of Gujarat and other Indian states. Here's two or three beasts: an Asian lioness, a Blackbuck deer and I believe the big antlered fellow in the bottom picture is a Sambar. 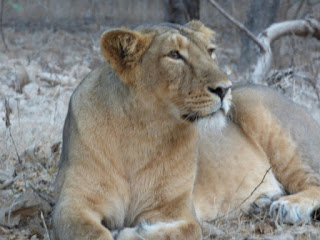 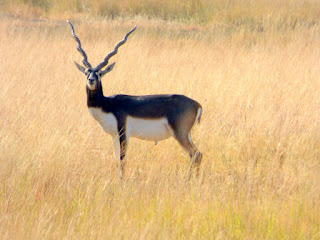 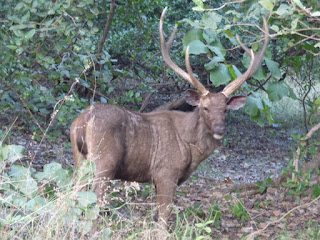 Posted by zanerjabd at 15:34 No comments: