An Argentine writer, born in Belgium 1914 and died in Paris 1984. There's a mixture! I was curious about the birth, but since discovered his father was a diplomat, perhaps an ambassador, so Belgium it was. Paris? Well, what writer does not want to die in Paris? If I can get there in time for my demise, I will happily use Paris as a gateway to whatever awaits me on the other side. Hopefully, Julio himself.

I was already a committed short story reader and writer when I first came across a story by Julio Cortazar. Ellen Datlow, the fiction editor for Omni Magazine, had just taken one of my own speculative fiction tales and of course I ordered half a dozen copies of the mag. In the same edition I found an absolute gem entitled 'The Most Profound Caress', a Kafka-esk tale of man who begins the day looking forward to his date with his girlfriend in the evening. The problem is, he's slowly sinking into the ground and continues to do so throughout the daylight hours - up to his knees by midday, up to his shoulders by late afternoon and by the time his beloved comes looking for him he is under the street and is only able to reach up and touch the sole of her shoe - the last caress before he sinks forever into the earth. It reads better than my explanation and I admired it most for its simplicity and its inventiveness. I suffered the usual short story writer's agony - I wished I had written it. I was now well and truly hooked as a follower of the Argentine writer, Julio Cortazar.

This introductory story was well enough, but I was unprepared for the absolute joy of finding that his other tales were not just simple and inventive, but blindingly brilliant. 'The Most Profound Caress' was merely a signpost to a golden library. These stories are superb:

End of the Game

Blow Up (made into a film starring David Hemmings)

We Love Glenda So Much

A Change of Light

the rest of his tales are merely awe-inspiring.

Now, here I should warn you of spoilers, because I'm going to talk about one or two of the stories above. Myself, I don't mind a spoiler when it's literature. I can reread Poe and Hawthorne time and again when I obviously know the endings of the tales. I read them for the style, structure and originality: the talent and wonder of the writing.

So, I'll start with the second of Cortazar's stories that I read, namely 'We Love Glenda So Much'. This has at its heart a fan club who meet regularly to discuss the films of their idol, Glenda. The scene opens with the fact that Glenda has retired from film making at the height of her career and every film she has made has been perfect. However,  later in life she announces to the world that she's going to make a come-back. The fans are horrified and they meet to discuss this terrible news, certain in their minds that any film she now makes will be bound to have flaws. Thus, they draw lots to choose one of their number to act and though nothing is explicit, one gathers what is going to happen with the last line of the story. 'On the untouchable heights to which we had raised her in exaltation, we would save her from the fall, her faithful could go on adoring her without any decrease; one does not come down from the cross alive.'

My second favourite is 'The Southern Highway' which at certain times has a traffic jam which goes back miles into the countryside south of Paris. The reader is taken onto the highway where traffic has come to a standstill for days. There are people foraging in the fields for food, there are love affaires between the occupants of different vehicles, gangs have been formed to protect themselves against rival gangs. Then suddenly one day things begin to move again and drivers and passengers rush back to their vehicles. The groups and communities shatter and scatter. Lovers part, foragers drop potatoes and cabbages and run for their cars. We follow one of the male lovers who once he enters Paris turns in a different direction to the woman who has been his temporary bedfellow. The sorrow is strong, deep.

The third and the last that I am going to spoil is 'House Taken Over'. This is truly a diamond of speculative fiction. A brother and sister live in a house left them by their parents. They seem content and occupy themselves with their own interests, but always in the same room. One day the brother says, 'They've taken over the back part of the house.' So, they lock the door that leads to that place and go on with their lives, until another room is 'taken over' and the door to that room is locked. Gradually there is no room left that has not been 'taken over' though we never learn who or what has invaded their peaceful lives. They leave, dropping the keys down a drain. Given that it is a brother and sister, my own conclusion is that it involves incest and once the act has soiled a room, entry is then barred to that room - but, I could be totally wrong and it could be aliens or ants.

When asked once by a would-be creative writer, 'How do I start a story?' Julio replied, 'You start in the middle and develop the story into a tornado using concentric circles.' Well, that isn't an actual quote, but I can't find the original and that's how I remember it.

Julio Cortazar was not keen on writing novels: he wrote six in all. Whereas he wrote many, many short stories and essays. He also wrote a wonderful non-fiction work 'Around the Day in 80 Worlds'. In one section he describes a boxing match, one of the combatants, Kid Azteca, being a favourite of his. The feints and dodges of the Kid, he writes, turned his opponent's chaos into a perfect absence by becoming an encyclopedia of holes. Those last four words thrilled me to the core. This man, I thought, is a master of his profession.

Cortazar was one of the founders of the Latin American Boom, along with Marquez and Llosa. A teacher and lecturer his poetic prose was used alongside his extensive knowledge of history to write stories that fill me with yearning to reach up and touch the pen in his hand. 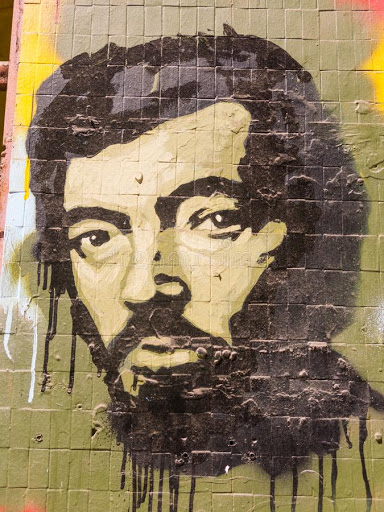